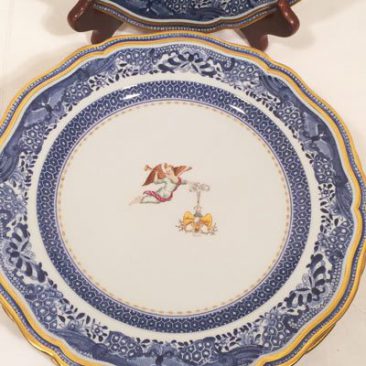 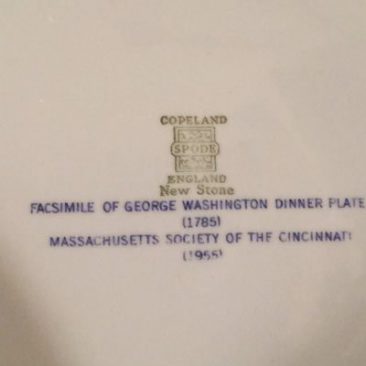 The Wonderful World of Antiques Blog by Elegant Findings Antiques

In 1775, Samuel Shaw and General Henry Knox, both members of the Cincinnati Society, set out on a ship, the Empress of China. This was the first ship to go to china to enter the China Trade.

The George Washington China Service, the Cincinnati Society Service, was originally made in Jingdezhen, China, where most of the Chinese Export China was being made. It was originally painted with an under glaze blue border without a center medallion. Shaw had a Chinese painter in China paint the insignia of the Cincinnati Society on the center of each piece. The service was originally 302 pieces including a tea service, a breakfast service and a dinner service. Shaw brought it back to New York on the Empress of China.

It was in New York where George Washington found this Cincinnati Society Service. He paid a company one hundred and fifty dollars for the 302 piece set, which was considered very expensive at this time.This was to be our nations first presidential china service. This set was used by George Washington for entertaining his guests at his three homes in Mount Vernon, New York and Philadelphia.

After Washington's death, the presidential service was passed on to his grandson Parke Curtis. It was then used at the Arlington House which belonged to the Confederate General Robert E. Lee. After the civil war, a lot of Washington's china service had been broken and damaged during its removal from General Robert E. Lee's Arlington House by the Union soldiers. What was left of the Washington service became the property of the government at that time. When William Mckinley became president, he ordered the return of what was left of this dinner service to Mary Curtis, daughter of Robert E. Lee and  Mary Anna Randolph Curtis.

In 1928, Henry DuPont, the founder of The Winterthur Museum bought sixty pieces of the George Washington's Cincinnati Society set from the descendants of Mary Curtis, They are still displayed at the Winterthur Museum on the 5th floor. This is where the majority of the George Washington Cincinnati service is today, Some pieces are at Mount Vernon and others may be found in private institutions.

Price of the twelve Spode dinner plates in the George Washington presidential antique china pattern  is $2400.00